A great advantage of the Sous Vide procedure is that you can relatively easily store cooked food until it is needed. Naturally this is not generally possible at room temperature; instead the food must be stored chilled or frozen.

To ensure product safety, it is on the one hand important to observe the minimum required cooking temperatures and times, and on the other hand to cool the finished food as quickly as possible after removal from the bath tank. The “dangerous” range, in which undesirable microorganisms multiple the fastest, is between around +20 °C to +40 °C. This means that it needs to be ensured that food spends as little time as possible in this unfavorable temperature range and is cooled down to a temperature of maximum +2 °C.

But why is that so important? A simple calculation: Let’s assume that the food contains a very common bacteria, Escherichia coli or E. coli for short, for the purpose of this theoretical calculation only a single cell. In the aforementioned temperature range from around +20 °C to +40 °C, this cell splits after 20 minutes and we now have two of them. At this point it’s still not at all a problem for people with functioning immune systems, but this splitting continues every 20 minutes, so after two hours there are already 64 pathogens. After four hours there are over 4,000 of them and after double that time more than 16 million!

This example quickly makes it clear that it’s definitely not advisable to take the matter of food hygiene lightly if you want to avoid rapid food spoilage and other potentially unpleasant surprises. Incidentally: Many harmful microorganisms do not cause visible damage to meat or fish. This means that it is initially impossible to tell by the smell or taste if these foods are already inedible. Because these bacteria are usually found on the surface of food, they can be killed by briefly immersing the vacuum bag in a water bath heated to 85 °C. 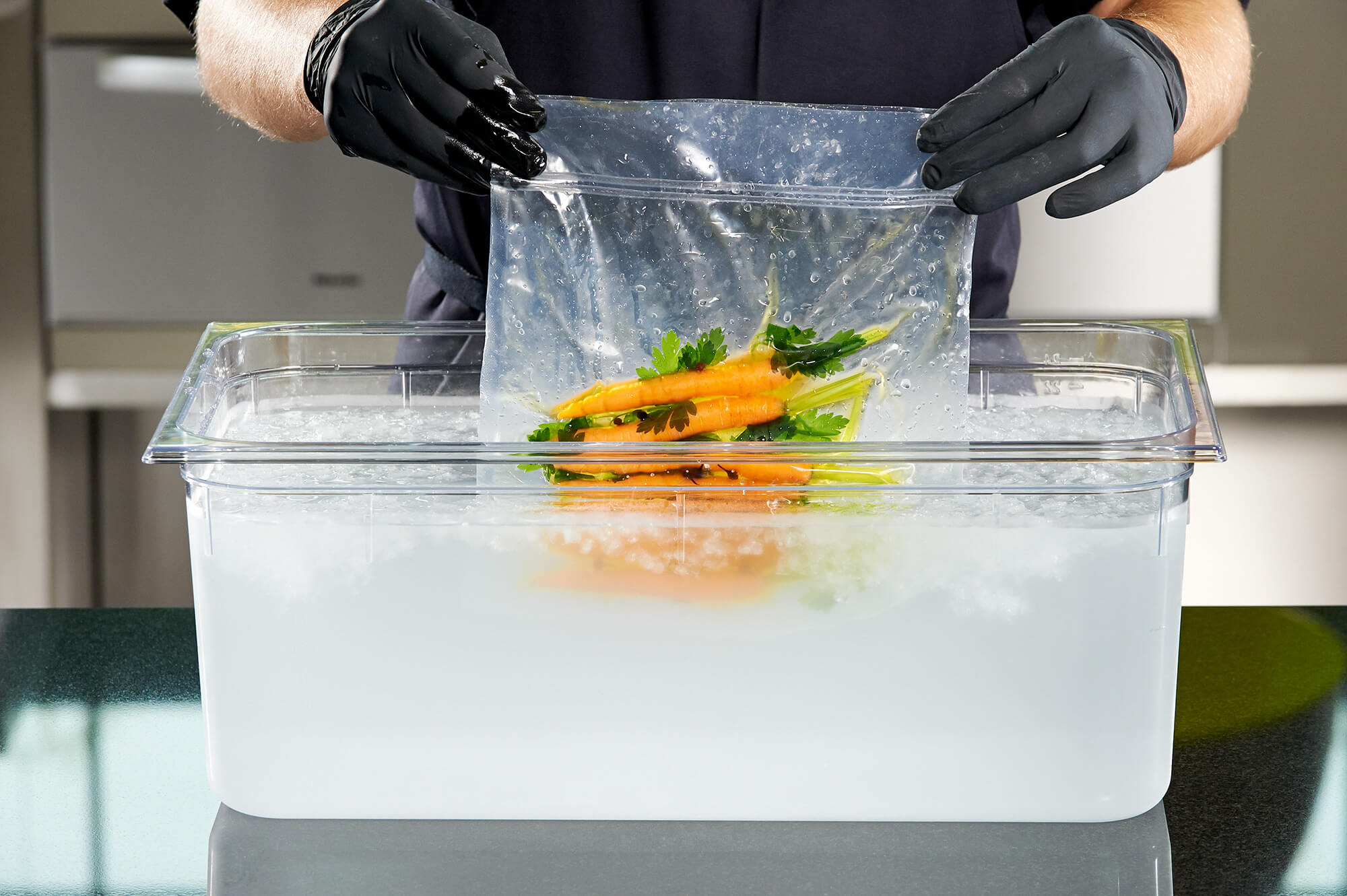 Here there are in principle four standard options; two that are recommended, two that are less suitable. Let’s start with the two unfavorable cooling methods, namely in the form of refrigerators and freezers.

The basic requirement for bringing the food down to a safe temperature of +2 °C within a maximum of 90 minutes is not possible with a commercially available refrigerator. In addition to this, depending on the amount of hot food being placed in the refrigerator, this can lead to the temperature within the cooling unit increasing to some extent while the food is still hot. This is naturally very undesirable for the other food stored in the unit, and seriously undermines the HACCP concept regarding an uninterrupted cold chain. A similar situation results if the hot cooked food is placed in a freezer. In this case, there is the additional danger that other frozen food might defrost.

In order to avoid both problems, it is therefore sensible to initially cool the hot food down to a core temperature of +2 °C in a container with an appropriate amount of ice/water mixture (each 50%) and only place it in the refrigerator or freezer after this process has been completed. When freezing, ensure that the maximum freezing capacity of the appliance (specified in “xx kg per 24 h”) is not exceeded. This usually refers, however, to the setting at the lowest temperature or at previous activation of the function that is usually referred to as “Super Frost.”

Loss of quality when freezing

The method of first cooling pre-cooked food in ice water before freezing it in a conventional freezer unfortunately inevitably leads to a certain loss of quality in many (water-containing) foods. This has nothing to do with the Sous Vide procedure as such; the same thing happens if freshly purchased food is frozen.

The physical reason for this is the relatively slow freezing process, during which large ice crystals grow in the food. These ice crystals break down the cell structures and damage them with them.More fluid escapes during defrosting, inevitably leading to a loss of aroma, consistency and nutrients. Another disadvantage is that the damaged structures now form a larger surface for microorganisms to attack; the shelf life of food that has been frozen is thus significantly shorter after thawing than it was before freezing. 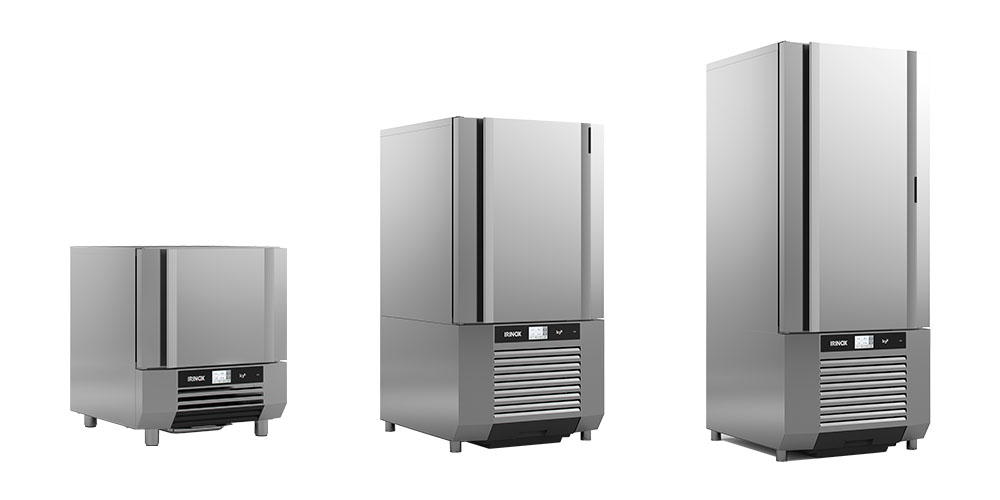 The aforementioned disadvantages can be almost completely prevented by using a blast chiller. Blast chiller operate at much lower temperatures than standard freezers (around -40 °C), contain powerful circulation fans in the cooling space and have enough power to freeze large quantities of food in a short time.

Blast chiller also often have a quick cooling function with which the temperature of food that should ultimately be stored cooled can be very quickly be decreased to the required temperature. The inconvenient and potentially error-prone procedure of cooling down the food in an ice water bath is therefore unnecessary – both for subsequent cooled or frozen storage.

Blast freezing is significantly more gentle on all water-containing food because the quick reduction in temperature prevents the growth of large ice crystals so that the original consistency is significantly less affected after defrosting compared to standard freezing. The same applies when it comes to flavor, nutrients and color. This is why frozen produce sold in retail shops is generally blast frozen. 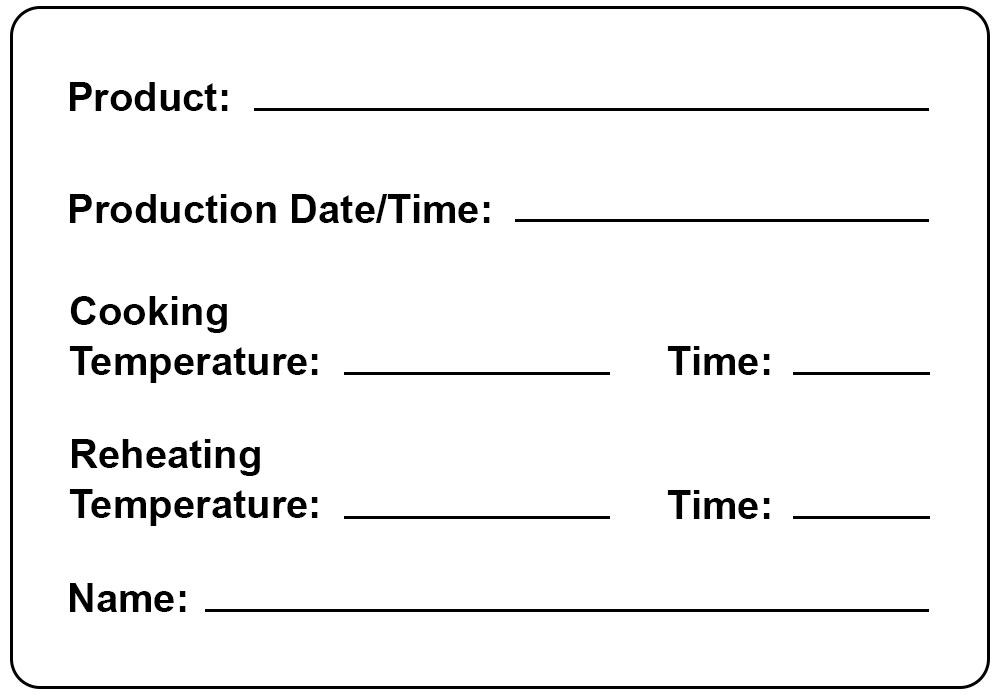 In general, freezing and subsequent defrosting is only useful if the shelf life when cooled is not sufficient. In addition to higher energy expenditure, the factor of time also plays a role because the regeneration process to reach serving temperature is much faster when the starting temperature of the food is between +2 °C and +4 °C as opposed to starting at -18 °C or even less.

It is very important that food is always marked at the start of the temporary storage with the package content, core temperature, cooking time, date of preparation and expiry date. This allows the respective packages to be used and prepared in a sensible order, in other words starting with the “oldest” product, and any food that has been stored for too long can be safely identified.

Regeneration, in other words the reheating of already cooked food, is extremely easy. Cooled food can be directly placed in the cooker. Frozen food can either be gently defrosted in the refrigerator first or simply be placed directly in the cooker while still frozen and subsequently warmed up. In principle it is always more gentle to defrost the food in the refrigerator, though almost all pre-cooked food tolerates regeneration directly from a frozen state very well. If there is enough time available, however, it is advisable to defrost in the refrigerator first. This is also more efficient. On the one hand, when frozen food is placed in the refrigerator it makes free cooling performance available so that the cooling unit doesn’t need to work so hard, and on the other hand, the Sous Vide cooker then doesn’t need as much energy to warm the food up to serving temperature.

As with Sous Vide cooking with immediate usage of the food being prepared, it is also important to reach the required core temperature when regenerating food. However, with regenerated food it is only important to reach this target temperature briefly because the actual cooking process has already been completed and does not need to be repeated again. Depending on the type of food and the cooking time originally required, this can lead to a significantly shorter preparation time for regeneration, which is perfect for an à la carte restaurant. In general, it can be assumed that it will take almost the same amount of time to reach the desired core temperature.

Food that requires additional browning or roasting before being served is handled in the same way as during the actual cooking process by briefly searing, browning with a flambé burner or placing it in a high temperature grill after regeneration.